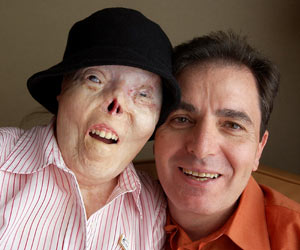 Jacqueline Saburido sits on the lap of her father, Amadeo Saburido, during a visit to Austin on Monday. Jacqui, who was burned in a drunken driving wreck in 1999, is taking part in a Texas campaign against it for July Fourth.

In May, doctors removed the bandages over Jacqueline Saburido's left eye.

Since 1999, when the young student from Venezuela was severely burned and disfigured in a drunken driving wreck in Austin, Jacqui has undergone dozens of operations -- skin grafts, finger amputations and countless other procedures. Many of the most desperate battles involved attempts to save her eyes and eyelids.

The cornea transplant on her left eye was an uncertain but potentially critical step to improve her vision. Jacqui and her father, Amadeo Saburido, waited tensely for the bandages to come off.

"I can see; I can see," Jacqui said she remembers shouting. The 24-year-old looked in the mirror and out the window during the drive home to their apartment in Louisville, Ky. "I can see all the cars."

"It was an incredible moment," Amadeo said. "Her life has changed completely."

The Saburidos recalled the operation in Austin on Monday during a visit to lend support to a campaign against drunken driving in Texas featuring Jacqui. Last fall, posters and other materials with images of her face from before and after the wreck began appearing.

Television spots featuring Jacqui aired in major media markets in October and March and will be shown again as part of a broader Texas Department of Transportation effort to clamp down on drunken driving for 17 days around July Fourth. The spots will alternate with radio and television announcements warning: Drink, Drive, Go to Jail. Officials say the target audience is men ages 21 to 34.

The $400,000 campaign, part of a national effort, includes extra patrols by state and local police.

"I wish this campaign had happened before my accident," Jacqui said.

Jacqui came to Austin in 1999 to take a break from college and study English. On Sept. 19, just three weeks after she arrived, she got a ride home from a party with four friends. A drunken driver struck their car.

Two of the passengers died, and two survived. The drunken driver, now in prison, was unscathed. Jacqui, pinned in the front passenger seat, was trapped in a fire that burned her beyond recognition.

She stayed in a burn unit in Galveston for five months and has been recovering since then. Jacqui's father, Amadeo, 50, left his family's air-conditioning factory in Venezuela to take care of her.

They now live near a team of doctors in Louisville. Between operations, Jacqui has been taking advanced English classes.

Jacqui said she is contemplating a face transplant but does not want to be the first one to try it. In the meantime, she is planning to have a cornea transplant on her right eye.

When she left the burn unit, Jacqui barely could see shadows. She had no idea what she looked like. Over and over, she stood before the mirror in her bathroom, peering at her face for details. To write an e-mail to her friends back home, she had to hover against the computer screen.

Now she can read better and cook more. One day, she said she may return to school. She wants to drive and travel, and perhaps write a book. She also wants to help her father run the business.

Amadeo said that if Jacqui's sight improves and stabilizes, he might begin traveling without her so he can expand his business. After the wreck, he spent month after month putting drops and lubricants in Jacqui's eyes at regular intervals. He barely rested at night.

Jacqui estimates that the vision in her left eye was once 20/400 and now is near 20/100. The improvement has brought disappointments. Recently, she studied the grafts on her right arm and concluded that they looked like chicken skin. She had thought her skin looked better.

Still, she said she feels a big improvement in her life. Before leaving Austin, Jacqui wants to take her father to watch the sunset over Lake Travis.